What Are the Most Dangerous Types of Collisions Between a Passenger Car and a Truck? 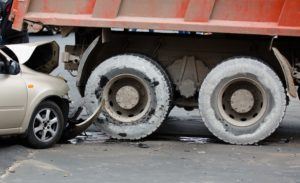 Many motorists get nervous driving on a highway near a large commercial truck, with good reason. When a tractor-trailer collides with a passenger car, there’s little question about which vehicle will sustain greater damage. While commercial trucks are involved in fewer accidents than passenger vehicles, the accidents involving trucks are often catastrophic. So, is there a particularly dangerous accident scenario that motorists need to fear? Here’s what data from the Federal Motor Carrier Safety Administration tells us through crash statistics for 2015.

The most frequent and deadliest type of accident involved a large truck striking a car in something other than a head-on or rear-end collision. These included sideswipe collisions, when a truck attempted to change lanes, and T-bone collisions, when a truck hit the broadside of a car. FMCSA data shows that these types of crashes were fatal 717 times in 2015 and represented 36 percent of all fatal truck crashes nationwide.

What lessons might we draw from this data? Here are a few thoughts:

If you’ve been injured in a truck accident in West Virginia, consult an experienced personal injury attorney at Kaufman & McPherson, PLLC.