How Is Fault Calculated in a West Virginia Car-Truck Collision? 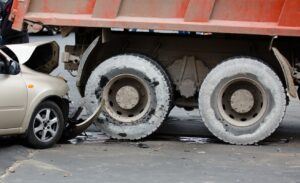 In collisions between cars and tractor trailers, car drivers and passengers are significantly more likely to die or suffer injuries than truck drivers. According to the National Highway Traffic Safety Administration (NHTSA), 82 percent of the people killed in crashes involving large trucks in 2017 were not occupants of a truck. Yet, this does not necessarily mean that a truck driver or their insurance company is always responsible for the injuries and other damage caused in a car-truck collision.

In a car-truck collision, the actions that each driver takes and fails to take are used to calculate their respective shares of fault. Insurance companies in West Virginia use fault judgments favorable to them and their insured when deciding if they’re obligated to pay for bodily injury and property damage and how much of the financial burden can be passed off to another party. Fault calculations are also used in personal injury lawsuits filed in civil court, while the criminal negligence standard is used to determine whether or not criminal charges will be filed against either driver.

When trucks are involved in accidents, trucking companies can be quick to send their own investigators to the scene to collect evidence, mostly with the goal of minimizing their own liability. This makes it all the more critical for anyone hurt in a truck accident to quickly secure representation from an experienced accident attorney, who can work to preserve evidence and to prevent a trucking company from obscuring the facts.

In West Virginia, a person who not more than 50 percent at fault for their injuries is entitled to compensation from the at-fault party (or parties). The attorneys at Kaufman & McPherson, PLLC conduct thorough investigations into car-truck collisions and seek the full compensation our clients deserve, including money to pay for medical bills, lost wages, property damage and pain and suffering. To schedule your free first consultation, call 304-842-4300 or contact us online.